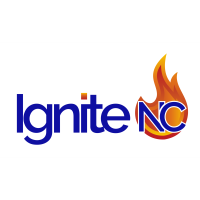 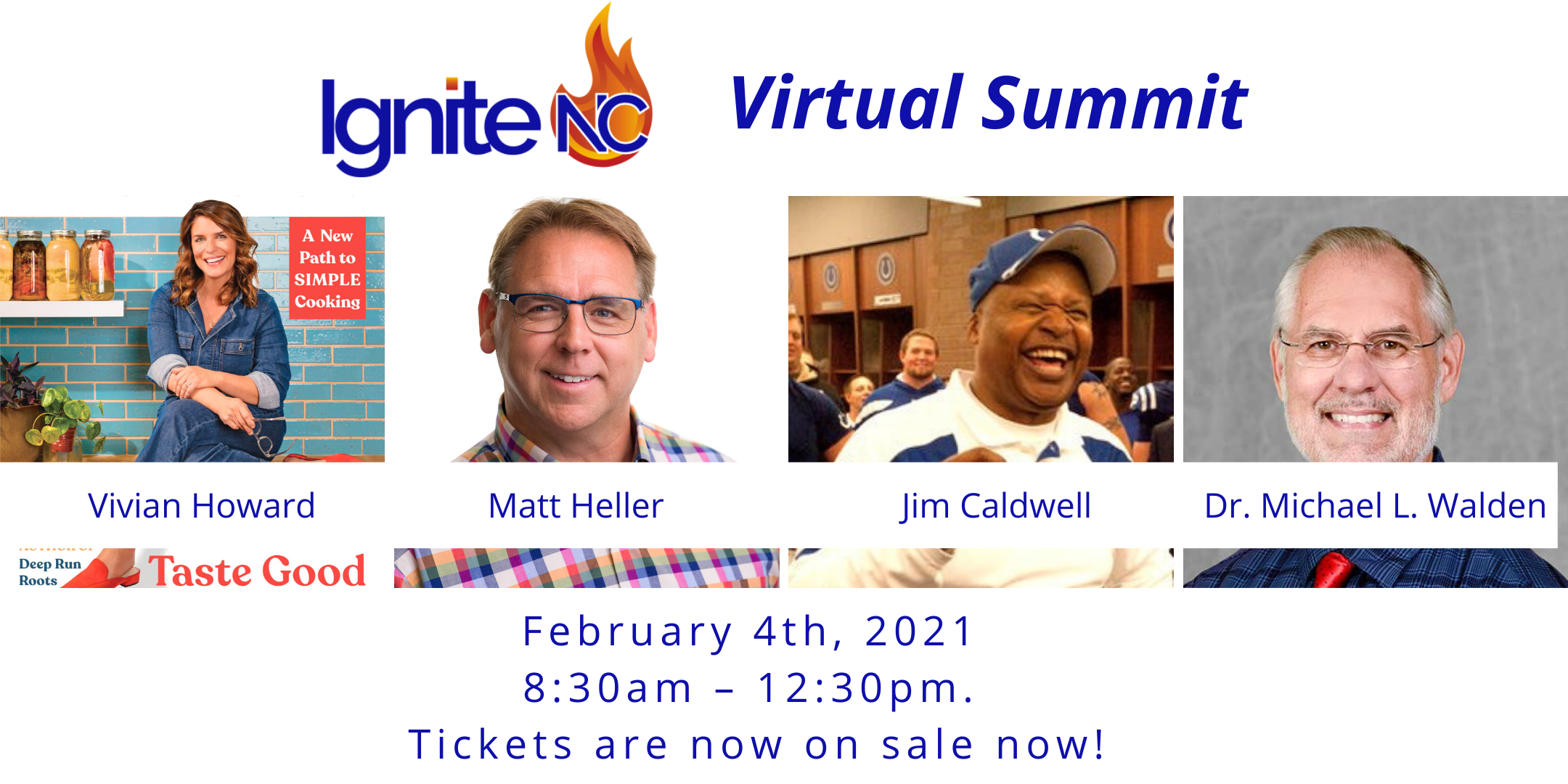 IgniteNC 2021 promises to be our most exciting NEW event of the year.

Discount will apply at check-out. 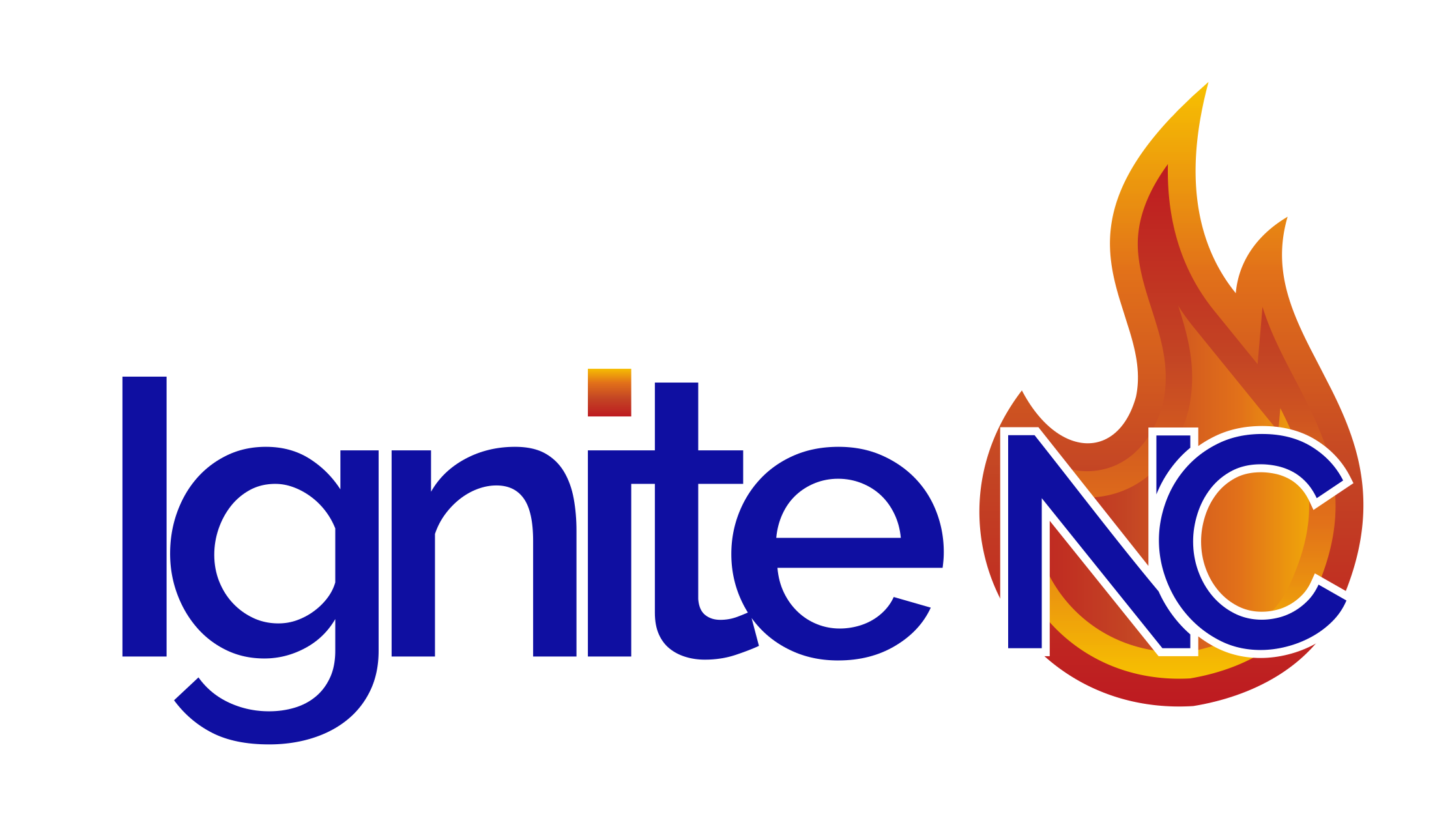 We will host leaders from the state of NC for a virtual summit, discussing business resiliency and state of the economy.

We're excited to bring to you the following speakers:

Vivian Howard is an award-winning cookbook author, tv personality, chef and restaurateur. Her first cookbook, Deep Run Roots: Stories & Recipes from My Corner of the South (2016), is a New York Times bestseller and was named ?Cookbook of the Year? by the International Association of Culinary Professionals. She created and stars in public television shows Somewhere South and A Chef?s Life, for which she has won Peabody, Emmy and James Beard awards. Vivian runs the restaurants Chef & the Farmer in Kinston, NC; Benny?s Big Time in Wilmington, NC; Handy & Hot and Lenoir (opening December 2020) in Charleston, SC. In October 2020, Vivian released her second cookbook, This Will Make It Taste Good: A New Path to Simple Cooking.

Jim Caldwell is an American football coach and former player.  From 1993 to 2000, Caldwell served as the head football coach at Wake Forest University.  He was the head coach of the Indianapolis Colts from 2009 to 2011 and Detroit Lions from 2014 to 2017.  Caldwell has been a part of two Super Bowl-winning teams in his career; as the assistant head coach and quarterbacks coach of the 2006 Colts for Super Bowl XLI and as offensive coordinator of the 2012 Baltimore Ravens for Super Bowl XLVII.  He most recently served as the assistant head coach and quarterbacks coach for the Miami Dolphins of the National Football League (NFL).

Matt Heller, after 20+ years in hospitality leadership and human resources, founded Performance Optimist Consulting in 2011 with one simple goal: Help Leaders Lead. Matt now works with organizations large and small to help them improve leadership competencies, customer service, employee motivation and teamwork. His book, ?The Myth of Employee Burnout? addresses how leaders can overcome the all-­too common phenomenon of employees burning out, or losing motivation over time.

Dr. Michael L. Walden is a William Neal Reynolds Distinguished Professor and  Extension Economist at North Carolina State University and a member of the Graduate Economics faculty with The Poole College of Management.   His Ph.D. degree is from Cornell University and he has been at N.C. State since 1978.   He has also been a Visiting Professor at Duke University.   He also serves as a member of the North Carolina Chamber of Commerce Foundation?s Board of Economic Advisors.
Dr. Walden has teaching, research, and extension responsibilities at NCSU in the areas of consumer economics, economic outlook, and public policy.   He has published eight books and over 250 articles and reports, including the book North Carolina in the Connected Age, published by the UNC Press.   He has served on several local and state level commissions. With his wife, he is the co-author of three ?economic thrillers?, Macro Mayhem, Micro Mischief, and Fiscal Fiasco, designed to teach economics in an entertaining way.
Dr. Walden can be frequently seen, heard, and read in the media.   He has daily radio programs aired on stations around North Carolina for which he has won two national awards.   He is often interviewed on local TV and radio news broadcasts, has appeared on NBC, CBS, The Fox Report, and the Newshour With Jim Lehrer, and is frequently quoted in such newspapers as USA Today, The News and Observer, The Charlotte Observer, The Boston Globe, The Wall Street Journal, and The Washington Post.   His biweekly column, You Decide, is carried by over forty newspapers in the state.   He has made over 2500 personal presentations.
Dr. Walden directs the semiannual economic forecast, The North Carolina Economic Outlook.   He has won numerous academic and public awards, including two Champion-Tuck Awards for Excellence in Broadcasting, the UNC Board of Governor?s Award for Excellence in Public Service in 2010, the Order of the Long Leaf Pine in 2013, and the Holladay Medal for Excellence from North Carolina State University in 2014.   His newest books are Real Solutions: Commonsense Ideas for Solving Our Most Pressing Problems and Disunion: A Political Thriller. 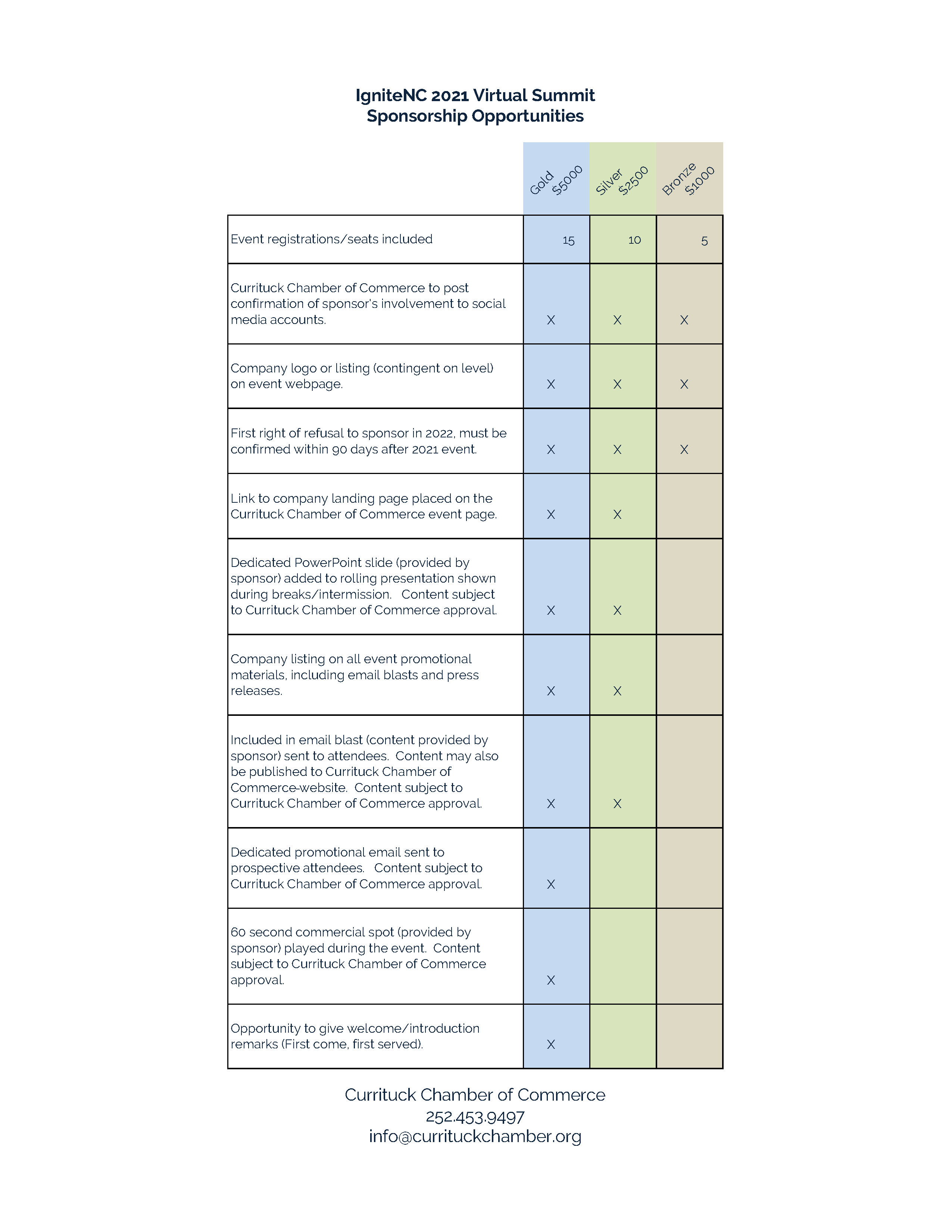 The IgniteNC 2021 Virtual Summit schedule is as follows:

We hope you will join us VIRTUALLY for the IgniteNC 2021 Summit!  Join us from the comfort of your own office or home.

A special thank you to our partners for their generous support. 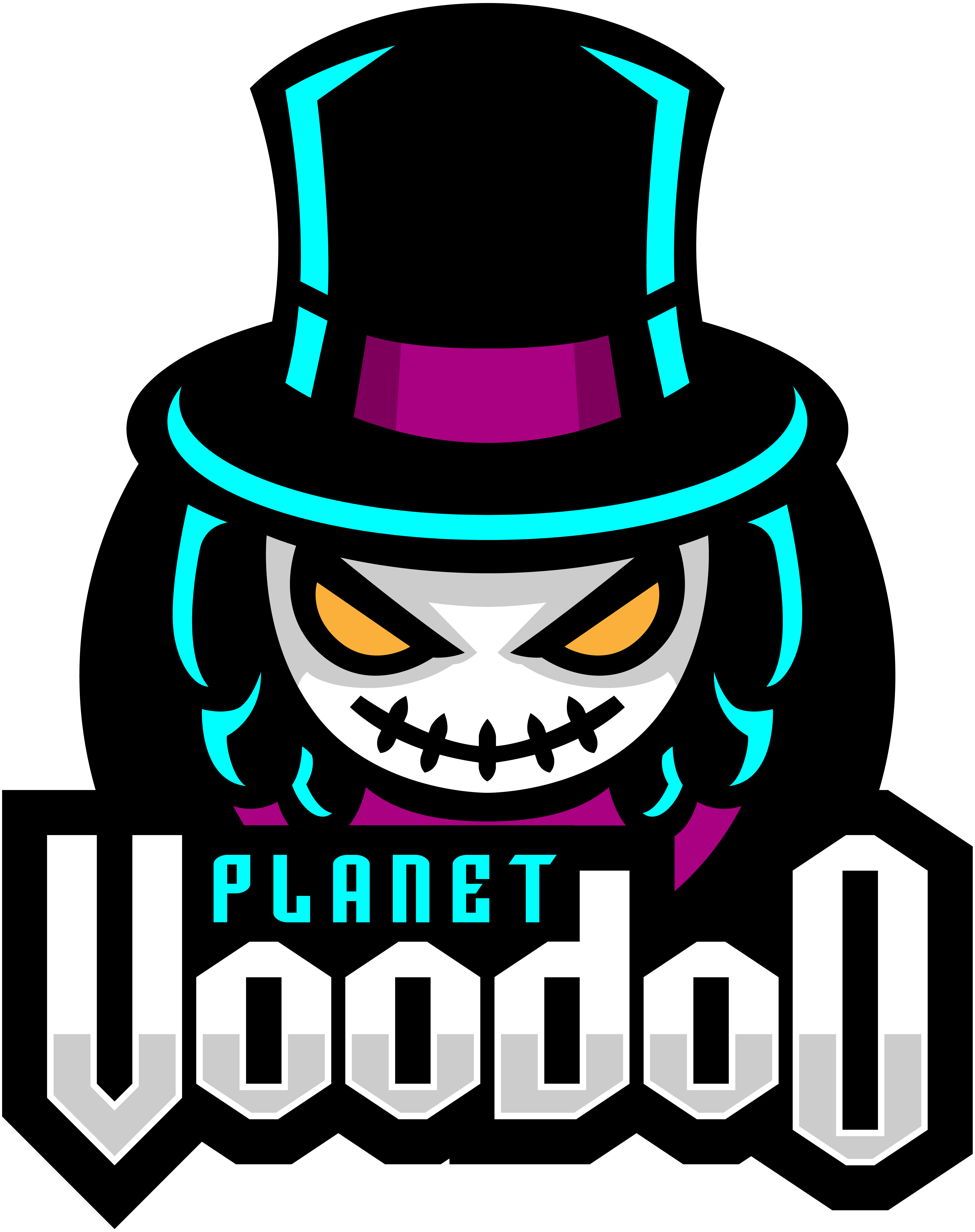